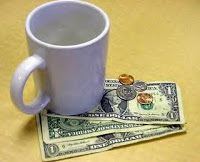 A San Diego Superior Court judge recently determined that Starbucks owes over $100 million for allowing its shift supervisors to participate in tip pools at its restaurants. The practice ran afoul of a California law that makes tips the sole property of the employees who receive them. Starbucks management had reasoned that shift supervisors deserved a share of the tips because they spent time doing the same tasks — making drinks and serving customers — as the baristas who were entitled to the tips. But, the court ruled that shift supervisors could not participate because they also directed the work of the baristas. Chou v. Starbucks Corp., Case No. GIC836925 (San Diego Superior Court 3/14/2008).

The judge computed the amount owing by estimating the average hourly tip rate earned by the shift supervisors at $1.71, and multiplying that times the 50,694,674 hours that shift supervisors had worked during the relevant time period. That amounted to $86.7 million. The balance of the award was for accrued interest. The judge also enjoined Starbucks from continuing its practice. Click here to read the judge’s decision.

The Rules on Tips

The California statute (Labor Code section 351) declares all tips to be the sole property of the employee or employees to whom they were left.  It is illegal for an employer or its “agent” to collect, take, or receive a tip, or to deduct any amount attributable to tips from wages owed to the employee. “Agent” means every person other than the employer who has authority “to hire or discharge any employee or supervise, direct, or control the acts of employees.”

Tips include any money left for an employee over and above the actual amount due the business for services rendered or for goods, food, drink, or articles sold or served to the patron. For dancers, the definition is broader, covering any amounts paid directly by a patron to the dancer. For an explanation of the legislative intent behind that provision, see Jameson v. Five Feet Restaurant, Inc., 107 Cal.App.4th 138 (2003) and the 2001.06.22 opinion letter listed under “Resources” below.

A 1990 Court of Appeal decision ruled that employers could require employees to pool their tips without violating the statute. But, requiring tipped employees to share with supervisors who meet the definition of “agent” is not permitted, as Starbucks has now learned, at a cost of $100 million plus. For further information about tip pooling, see Leighton v. Old Heidelberg, Ltd., 219 Cal.App.3d 1062 (1990); the Jameson decision referred to above, and the 2005.09.08 and 1998.12.28-1 opinion letters listed under “Resources” below.