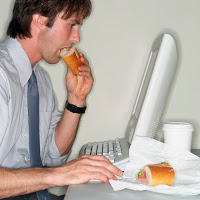 One of the California Courts of Appeal has rejected the common wisdom about the meal period rule. While other courts and the Labor Commissioner have ruled that employers must ensure (that is, force) employees to take their 30-minute meal periods, the San Diego Division of the Fourth District has ruled it sufficient for employers to make meal periods available. There is no need to police employee compliance. Brinker Restaurant Corp. v. Superior Court, 165 Cal.App.4th 25 (2008) (ruling on a class certification motion by restaurant workers).

California Labor Code section 512 bars employers from having an employee work more than five hours without providing the employee with a meal period of not less than 30 minutes. The wage orders promulgated by the Industrial Welfare Commission mimic that provision. See, for example, IWC Order No. 5, page 7, section 11, which was applicable in this case. The statute and the wage orders also provide that the meal period may be waived by mutual consent of the employer and the employee if the work period is less than six hours.

The limitation of the express waiver provision to work periods of less than six hours had led the Labor Commissioner and at least one Court of Appeal to conclude that employers had an obligation to police the meal period provision. In a January 2002 opinion letter, the Labor Commissioner stated that employers had an “affirmative obligation” to ensure that employees were relieved of all duty. In Cicairos v. Summit Logistics, Inc., 133 Cal.App.4th 949 (2005), the Third District Court of Appeal in Sacramento quoted the language from the opinion letter. As a result, many lawyers have advised their employer clients to “ensure” that their employees take meal periods.

The Brinker court, relying on recent decisions from federal district courts in California, rejected the common wisdom, and ruled that there was no duty to ensure that employees take meal periods. It looked to the Merriam-Webster Collegiate Dictionary definition of “provide” to conclude that it is sufficient for employers to make meal periods “available.”

UPDATE > While the Brinker case is good news for employers, it will not be the final word. The California Supreme Court granted review of the decision on October 22, 2008. That depublished the opinion from the official reports, and makes it no longer citable. It may take up to two years to get a final decision from the Supreme Court.

The Department of Labor Standards Enforcement has revised its Enforcement Manual (see Section 45-2-1 on page 45-4) to account for the Brinker decision. This should still be persuasive while we await final word from the Supreme Court.