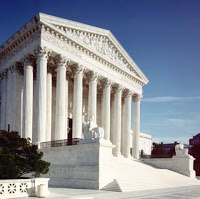 The 2008-09 term of the United States Supreme Court will bring decisions in the following cases that involve employment law issues. We will report on the decisions themselves when they are handed down.

Locke v. Karass, Case No. 07-610. Question Presented: “In Ellis v. Railway Clerks, this Court unanimously “determined that the [Railway Labor Act], as informed by the First Amendment, prohibits the use of dissenters’ [union] fees for extraunit litigation.” Lehnert v. Ferris Faculty Ass’n, 500 U.S. 507, 528 (1991) (opinion of Blackmun, J., citing Ellis, 466 U.S. 435, 453 (1984)). In Lehnert, a four-member plurality therefore held “that the Amendment proscribes such assessments in the public sector.” Id. Moreover, Justice Scalia’s separate opinion, concurring in part in the judgment announced by Justice Blackmun, reasoned that “there is good reason to treat [Ellis and the Court’s other statutory cases] as merely reflecting the constitutional rule.” Id. at 555. May a State, nonetheless, consistent with the First and Fourteenth Amendments, condition continued public employment on the payment of agency fees for purposes of financing a monopoly bargaining agent’s affiliates’ litigation outside of a nonunion employee’s bargaining unit? Oral Argument: 10/06/2008. Merits Briefs

A unanimous Court answered “yes” in a decision issued on January 21, 2009. A local may charge for its national’s litigation expenses so long as (1) the subject matter of the national litigation bears an appropriate relation to collective bargaining and (2) the arrangement is reciprocal—that is, the local’s payment to the national affiliate is for “services that may ultimately inure to thebenefit of the members of the local union by virtue of their membership in the parent organization.”

Crawford v. Metro. Gov’t of Nashville & Davidson County, Case No. 06-1595. Question Presented: “Does the anti-retaliation provision of section 704(a) of Title VII of the 1964 Civil Rights Act protect a worker from being dismissed because she cooperated with her employer’s internal investigation of sexual harassment? Oral Argument: 10/08/2008. Merits Briefs

The Court answered “yes” in a decision issued on January 26, 2009. Justices Alito and Thomas concurred, but wrote separately to emphasize that the Court was not adopting a broad definition of “oppose” that might encompass non-purposive conduct.

AT&T Corp. v. Hulteen, Case No. 07-543. Questions Presented: “Before the passage of the Pregnancy Discrimination Act of 1978 (PDA), it was lawful to award less service credit for pregnancy leaves than for other temporary disability leaves. Gilbert v. Gen. Elec. Co., 429 U.S. 125 (1976). Accordingly, the questions presented are: 1. Whether an employer engages in a current violation of Title VII when, in making post-PDA eligibility determinations for pension and other benefits, the employer fails to restore service credit that female employees lost when they took pregnancy leaves under lawful pre-PDA leave policies. 2. Whether the Ninth Circuit’s finding of a current violation of Title VII in such circumstances gives impermissible retroactive effect to the PDA. Oral Argument: 12/10/2008. Merits Briefs

14 Penn Plaza LLC v. Pyett, Case No. 07-581. Question Presented: ” Is an arbitration clause contained in a collective bargaining agreement, freely negotiated by a union and an employer, which clearly and unmistakably waives the union members’ right to a judicial forum for their statutory discrimination claims, enforceable?” Oral Argument: 12/01/2008. Merits Briefs

Resources for Following the Court