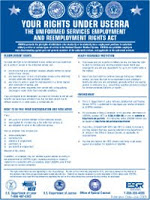 The Supreme Court’s recent decision in Staub v. Proctor Hospital, Case No. 09-400 (Mar. 1, 2011) discusses the standards for proof of motive in a claim for discrimination based on military obligations. This prompts consideration of the role of motive in all sorts of employment cases.
In Staub, two low level supervisors were hostile to the military reserve obligations of an angiography technician. One of the supervisors gave the technician a disciplinary warning with a directive to report to one of the supervisors when his cases were completed. After it was reported that the technician had violated the directive, the vice president of human resources decided to fire him. The technician complained that one of the supervisors had fabricated the original warning out of hostility to his military obligations, but the vice president adhered to her decision.
The Uniformed Services Employment and Reemployment Rights Act of 1994(USERRA) and the Department of Labor’s USERRA Regulations prohibit employers from discriminating against employees based on military service or the obligation to perform military service. An employee may sue for damages caused by a USERRA violation if his military affiliation was a “motivating factor in the employer’s action.” Although Proctor Hospital argued that it was shielded from liability because its vice president was not hostile to the technician’s military obligations. The Supreme Court rejected the argument, holding that, “if a supervisor performs an act motivated by antimilitary animus that is intended by the supervisor to cause an adverse employment action, and if that act is a proximate cause of the ultimate employment action, then the employer is liable under USERRA.”
The same analysis appears to apply in cases brought against California employers under Title VII and under California’s Fair Employment and Housing Act (FEHA). See, e.g., Poland v. Chertoff, 494 F.3d 1174 (9th Cir. 2007); Reeves v. Safeway Stores, Inc., 121 Cal.App.4th 95, 16 Cal.Rptr.3d 717 (2004).
Employers should keep in mind that there are other standards for proving unlawful motive in other types of employment cases.
Where direct evidence of discriminatory intent is unavailable, plaintiffs may prevail in disparate treatment cases under Title VII and FEHA by invoking the burden-shifting approach set forth in McDonnell Douglas. See McDonnell Douglas Corp. v. Green, 411 U.S. 792 (1973); Guz v. Bechtel Nat. Inc., 24 Cal.4th 317, 8 P.3d 1089 (2000). Under that approach, the plaintiff establishes a prima facie case by showing that (1) he belongs to a racial minority; (2) he applied and was qualified for a job the employer was trying to fill; (3) though qualified, he was rejected; and (4) thereafter the employer continued to seek applicants with complainant’s qualifications. That shifts the burden to the employer to provide a legitimate reason for its action, which the plaintiff may then overcome by proving that the employer’s stated reason is a pretext for discrimination.
The courts will also entertain disparate impact cases under Title VII and FEHA. Griggs v. Duke Power Co., 401 U.S. 424 (1971); Guz v. Bechtel National, Inc. 24 Cal.4th 317, 100 Cal.Rptr.2d 352, 8 P.3d 1089 (2000). To prevail in such cases, the plaintiff must identify a specific hiring practice (such as a test) that has a substantial statistically disproportionate effect on a protected group. Even if the employer did not intend to discriminate, it is still liable for discrimination unless it can show that the practice is substantially job-related. The EEOC has adopted Uniform Guidelines on Employee Selection Procedures, which provide guidance for avoiding disparate impact claims.
In cases where there is evidence of both a discriminatory, and a non-discriminatory motive, employers may invoke the mixed motive defense. Desert Palace, Inc. v. Costa, 539 U.S. 90, 123 S.Ct. 2148 (2003); Heard v. Lockheed Missiles & Space Co., 44 Cal. App. 4th 1735, 52 Cal. Rptr. 2d 620 (1996). Under the FEHA, it is a complete defense. In Title VII cases, it limits the plaintiff’s remedies.