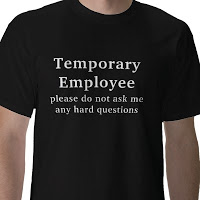 As we have pointed out in previous posts (One Worker, Two Related Employers, Who Is The (An) Employer), there may be more than one person involved on the employer side of an employment relationship. If each of those persons has enough control, a joint employment relationship may be created. Here, we examine the concept in the context of three statutory schemes: Title VII, the Fair Labor Standards Act, and the Family and Medical Leave Act.

The federal employment discrimination statute defines employer as “a person engaged in an industry affecting commerce who has fifteen or more employees for each working day in each of twenty or more calendar weeks in the current or preceding calendar year,” and employee as “an individual employed by an employer.” 42 U.S.C. section 2000e. It does not define employ. However, the federal courts have made clear that there is no liability under Title VII unless there is an employment relationship between the “employee” plaintiff and the “employer” defendant. To determine whether there is a sufficient relationship, the courts evaluate a number of factors.

For a case that applied the concept to a disability discrimination claim, see Bristol v. Bd. of County Comm’rs, 312 F.3d 1213 (10th Cir. 2002). There, the 10th Circuit held that, under Colorado law, the County Board of Commissioners did not have sufficient control over sheriff’s department employees to be considered a joint employer with the sheriff.

The FLSA defines employer to include “any person acting directly or indirectly in the interest of an employer in relation to an employee.” Employee means “any individual employed by an employer.” Employ includes “to suffer or permit to work.” 29 U.S.C. section 203. The Department of Labor’s regulations add that these definitions look to “economic reality” rather than “technical concepts.” 29 CFR 784.8. The analysis is similar to that used to decide who is protected under Title VII. See Lambert v. Ackerley, 180 F.3d 997 (9th Cir. 1999). The Department of Labor also has regulations that speak specifically to joint employment under the Fair Labor Standards Act. 29 CFR 791.1 and 791.2.

The Third Circuit recently discussed the test for joint employer status under the Fair Labor Standards Act in the context of a holding company providing shared services to its subsidiaries in In re Enterprise Rent-a-Car Wage and Hour Employment Practices Litigation, 2012 U.S. App. LEXIS 13229 (3d Cir. June 28, 2012). For a discussion of joint employment in the context of an attempt by prisoners to hold state officials responsible for FLSA violations, see Gilbreath v. Cutter Biological, Inc., 931 F.2d 1320 (9th Cir. 1991).

The FMLA expressly adopts the definitions of the FMLA. See 29 U.S.C. section 2611. The Department of Labor has a regulation that addresses the joint employment relationship, and its effect on FMLA requirements. See 29 CFR section 825.106.

For a case that applied the concept to an FMLA claim, see Moreau v. Air France, 356 F.3d 942 (9th Cir. 2004), where the Ninth Circuit affirmed a federal district court’s ruling that Air France was not a joint employer with the entity that supplied ground handling services.

A recent decision from the United States District Court in Oregon illustrates the high stakes involved in a decision about who the employer is. A plaintiff who alleged that his priest molested him sued the Holy See itself, claiming that the Vatican was the priest’s employer. On August 20, 2012, United States District Judge Michael Mosman ruled that the evidence did not establish enough control by the Vatican to render it the priest’s employer. Doe v. Holy See, Case No. 02-CV-00430 (U.S. Dist. Ct. Ore. 8/20/212). In March 2009, the Ninth Circuit had ruled that the plaintiff’s claim of respondeat superior liability for the priest’s actions was not barred by the Foreign Sovereign Immunities Act. Doe v. Holy See, 557 F.3d 1066 (9th Cir. 2009).