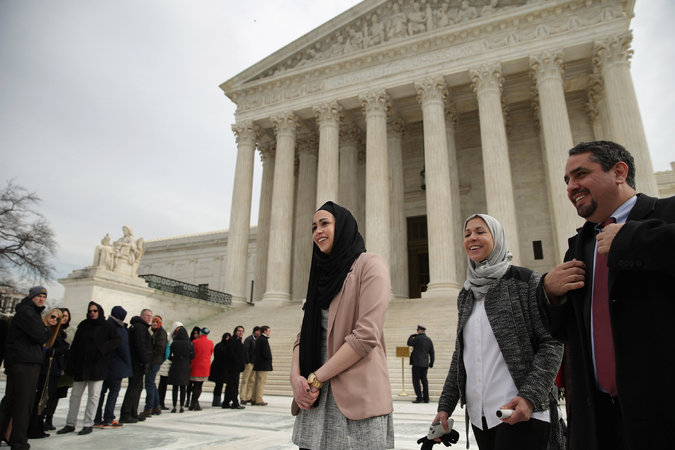 In EEOC v. Abercrombie & Fitch Stores, Inc., Case No. 14-86 (June 1, 2015), the United States Supreme Court ruled that Abercrombie was not entitled to summary judgment on a disparate treatment claim by a Muslim woman who was not hired because the headscarf she wore pursuant her religious obligations conflicted with the employer’s dress code. The decision exposed a rare split between Justice Scalia (who wrote the 8-1 majority decision) and Justice Thomas (who dissented). The New York Times has reported that Scalia and Thomas agreed 91 percent of the time in decisions handed down through end of the 2013-14 term of the Court. (Comprehensive data on Supreme Court decisions is available from The Supreme Court Database.)

Abercrombie has a dress code (termed a “Look Policy”) that prohibits the wearing of “caps” at work, because that is too informal for its desired image. When Samantha Elauf (a practicing Muslim who wears a headscarf) applied for a job at an Abercrombie store, an interviewer concluded that she was qualified for the job, but worried that her headscarf might conflict with the dress code. The district manager eventually directed the interviewer not to hire Elauf because her headscarf would violate the dress code.

The EEOC brought suit on Elauf’s behalf in the District Court for the Northern District of Oklahoma, which granted summary judgment to the EEOC on liability, denied summary judgment to Abercrombie, and awarded $20,000 in damages after a trial. EEOC v. Abercrombie & Fitch Stores, Inc., 798 F.Supp.2d 1272 (N.D. Okla. 2011). The District Court rejected Abercrombie’s claim of undue hardship if it had to accommodate the wearing of a headscarf, noting that it granted numerous exceptions to the Look Policy, and had recently granted eight or nine head scarf exceptions.

The Tenth Circuit reversed, and ordered the District Court to grant summary judgment to Abercrombie. EEOC v. Abercrombie & Fitch Stores, Inc., 731 F.3d 1106 (10th Cir. 2013). It arrived at that conclusion, because Elauf never specifically informed Abercrombie that wearing a headscarf was based on her religious beliefs, or that she would need an accommodation for that practice.

In reversing the Tenth Circuit’s decision, the Supreme Court stated that Title VII’s ban on religious discrimination focuses on the employer’s motivation, not its knowledge. As Justice Scalia explained for the, “an employer who acts with the motive of avoiding accommodation may violate Title VII even if he has no more than an unsubstantiated suspicion that accommodation would be needed.” Justice Thomas disagreed, arguing that the refusal to hire Elauf was a mere application of the “neutral” Look Policy, which did not rest on intentional discrimination: “Abercrombie refused to create an exception to its neutral Look Policy for Samantha Elauf ’s religious practice of wearing a headscarf. Ante, at 2. In doing so, it did not treat religious practices less favorably than similar secular practices, but instead remained neutral with regard to religious practices.”

The Court’s decision was not a complete vindication for the EEOC. The case was sent back to the Tenth Circuit to determine whether the District Court’s summary judgment for the EEOC was supported by the evidence. “On remand, the Tenth Circuit can consider whether there is sufficient evidence to support summary judgment in favor of the EEOC on the question of Abercrombie’s knowledge. The Tenth Circuit will also be required to address Abercrombie’s claim that it could not have accommodated Elauf ’s wearing the headscarf on the job without undue hardship.”